Jwong Boutique before and after looting

Jwong Boutique is a store located in Manhattan that buys, sells, consigns and trades high-end sneakers in addition to providing restoration services, and selling clothing. Status by Sass spoke with the founder, Jay, about how he started his business and what happened to it this past week.

How I started my business

In 2006, I had just finished high school and was going into college. While I was going to school in Jamaica, New York, I had been spending time traveling around different parts of Queens. On Jamaica Avenue, the thing that caught my eyes were the sneaker stores. After visiting different stores, I found a manager who let me sell some sneakers online. Buying and reselling sneakers wasn't as big as it is now, and I wanted to pursue what I saw as the American dream. I was willing to work for that dream.

While slowly building my business, I continued with higher education by attending university and not dropping out. I became the first person to have a college degree in my family, and finished college with 2 majors (accounting and economics) and 1 minor (Chinese). I really believe that getting a higher education enabled me to be who I am today. During this time, I kept hauling all these shoes, and I can say that hauling 30 pairs of them on the subway daily is not easy, but this is what I always wanted to do.

Eventually, I started selling out of my parent's garage. It's the way I believe a lot of successful businesses start. I finished college and tried to find a job, however, it didn't work out the way that I expected. I had always wanted to be a policeman, and since I ended up not being one, I felt like my business was the best way to serve my community.

From 2006 to 2012, I just collected a bunch of sneakers and had a dream that I would one day turn all this into a full-time business. I had about 350 pairs of shoes, mainly from my younger brother which got me into restoration. Knowing that kids are going to wear out their shoes fast, every time he walked them out, I was able to restore his sneakers. I also read about different ways to check the authenticity of the shoes.

Making it in the Sneaker Business

So in September 2012, I opened my first store in Elmhurst, Queens using basement space. It was very hard to get people to come into the basement. Every time, people would come in and the first question they would ask me was whether the shoes were real or fake. A lot of people who came in during that time would think that the sneakers were fake just because my business was in a basement even though the layout of the location was very luxurious for a basement. I ended up buying and selling a lot of things there. Then I took the big risk, and decided to go to Manhattan with my family's backing.

It was the first time I told my mom that I had a store. She had thought that for the past 4 years I was just using my time doing a nonsense hobby, but now she could see that this wasn't the case. My family helped me come to Manhattan to take this risk because I knew that I could make it in the Big Apple. My hours were from the afternoon to a bit past 8 PM because I was working at the same time. I had had a full-time job since 2012.

I worked full-time as an electrician all while growing my business. When I told people that I do two jobs, I meant it. It was doing a lot of physical work, and like almost every single store owner, I went back to my store after every work day because I knew that I needed to maintain it. This took a lot of time because you always needed to get the latest shoes. Any collector knows that getting any shoe with a hype is hard. With a team that worked with me, we were able to get 20 to 30 shoes per release which is quite a lot.

For the last 2 years, I was also still in an apprentice program. So not only did I have my business and a full-time job, but also the program. Still, with all of these things, I was able to manage all of it until the looting that happened on June 1, 2020.

The pandemic and looting

Anyone that works with me, or my classmates, knows where I came from. The only way I was able to go to university was because I had been accepted through a minority program, otherwise, I wouldn't have been able to afford it. I can say that college made me a better person.

When I moved my business to Manhattan, I set up my store on the 2nd floor just to reduce costs. For the last 3 years, things had been picking up with profits along with expenses that could be maintained. Then the pandemic hit, and it hit so hard. Even though I could still sell online, I couldn't keep up because everyone was scared to go outside. To make matters worse, my other job had a temporary layoff because of the virus. Everyone was affected.

At this point I had been able to have enough money backed up for a month or 2 months which would have helped my business get through the pandemic. Then this incident occurred with the looting, and it messed up everything I had been saving up for. 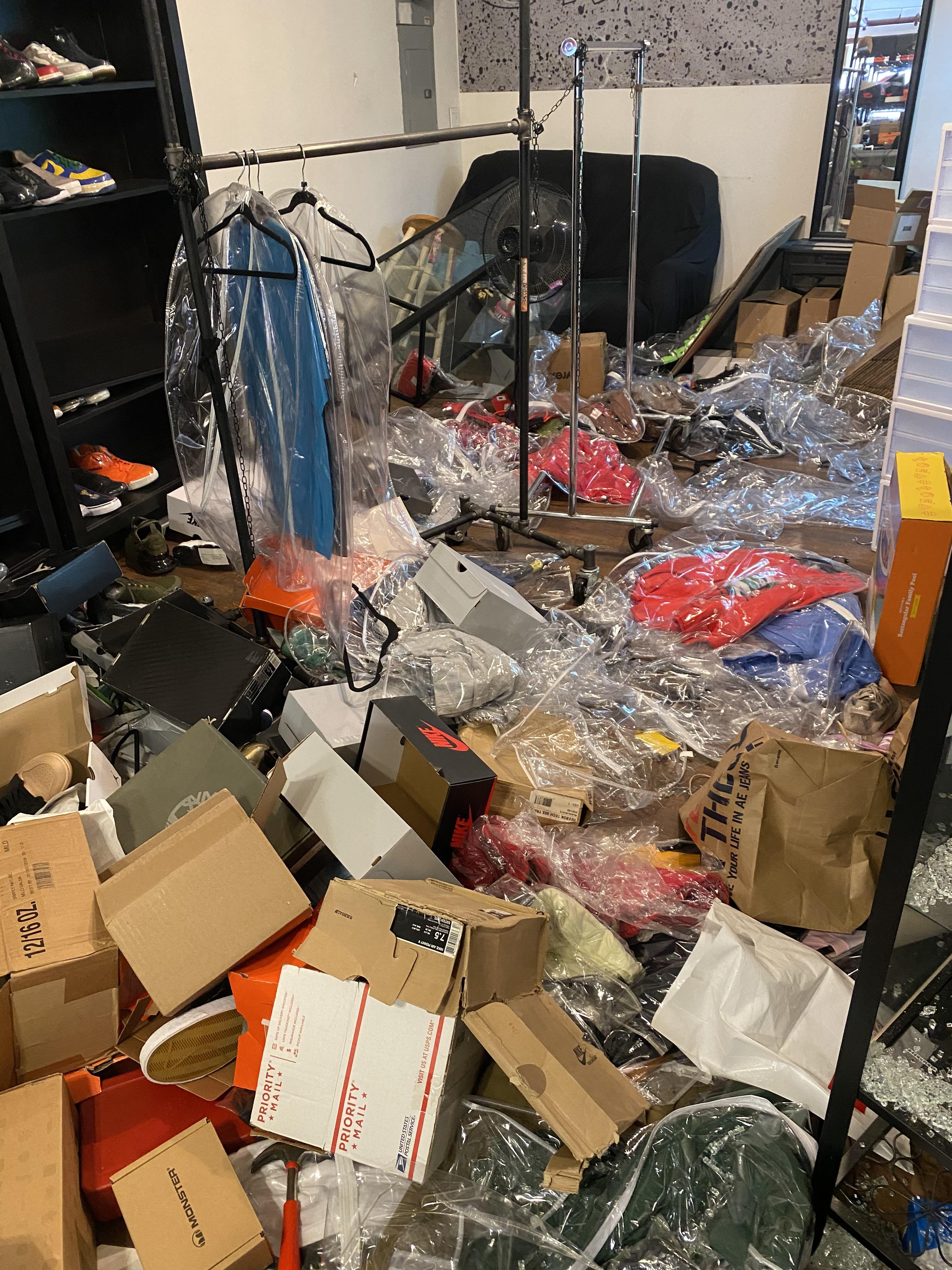 The store after the looting

I had been saving all that inventory in my store, and waiting to release it when the store reopened. It put me in such a big hole. To see everything that I had done to finally make it where I am today taken - it just blows your mind.

In 30 minutes, everything was gone

The looters clearly knew what they were doing because they did everything in 30 minutes, the time it usually takes the police to come. I have all the recordings on my cameras.

They were plotting to come to the store at 4 AM in the morning. Two guys on a bike can be seen pointing to the banner for my store outside. They looked at that, and used some kind of crowbar to open the first red door, walk upstairs, and check every single business on that floor. Mine was the only one with a glass door because I hoped to get more customers to walk by and check it out when I had first opened my store. 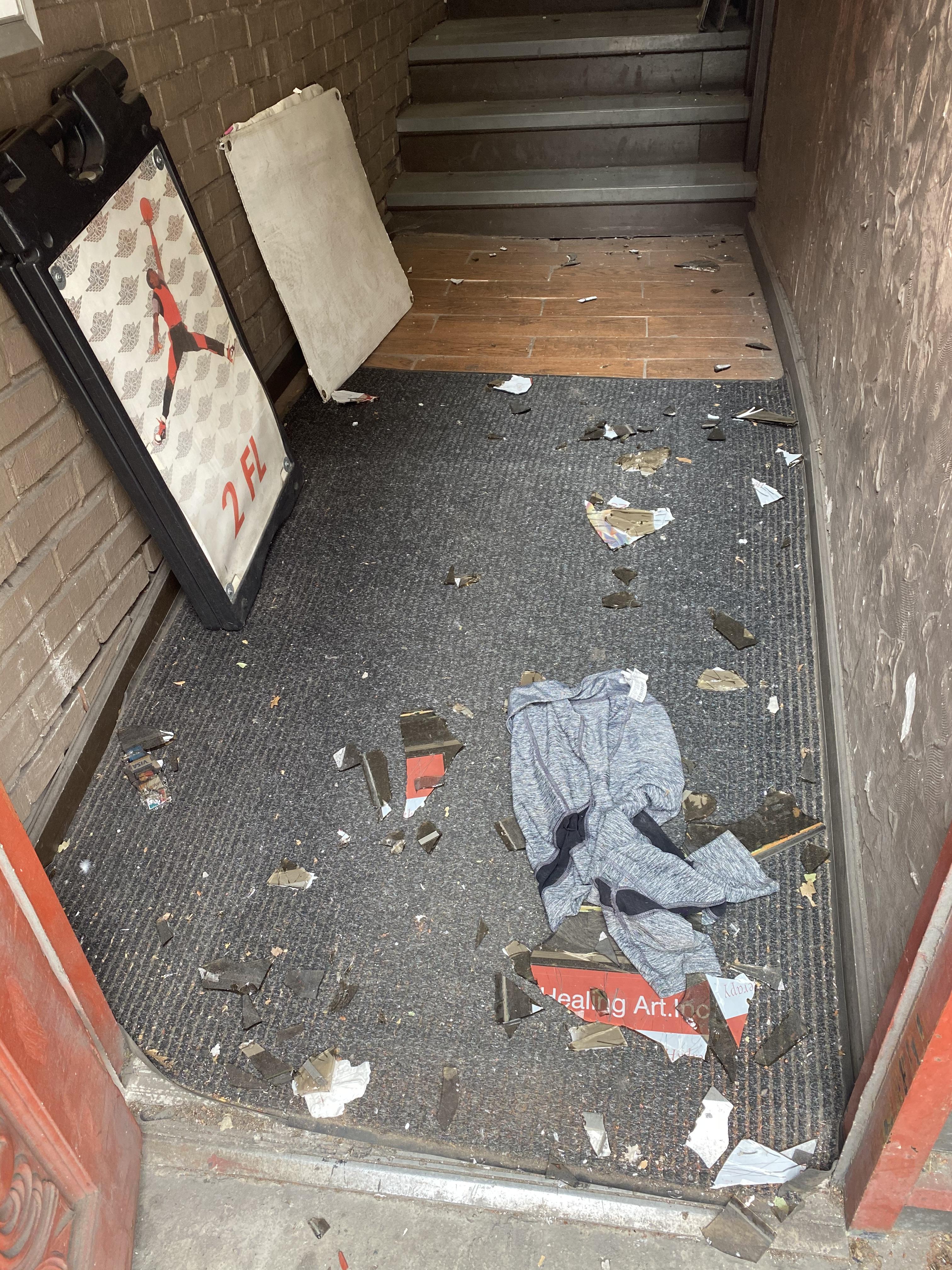 They came upstairs then they left, and returned with a ladder that they tried to use to break the glass. By 6:30 AM, they were standing in front of my door battering the door and glass down. They got through the glass, and they used all my bags in the stores to take my store's merchandise. They didn't even take the boxes so they could shove more things into the bags.

CCTV footage of the looters 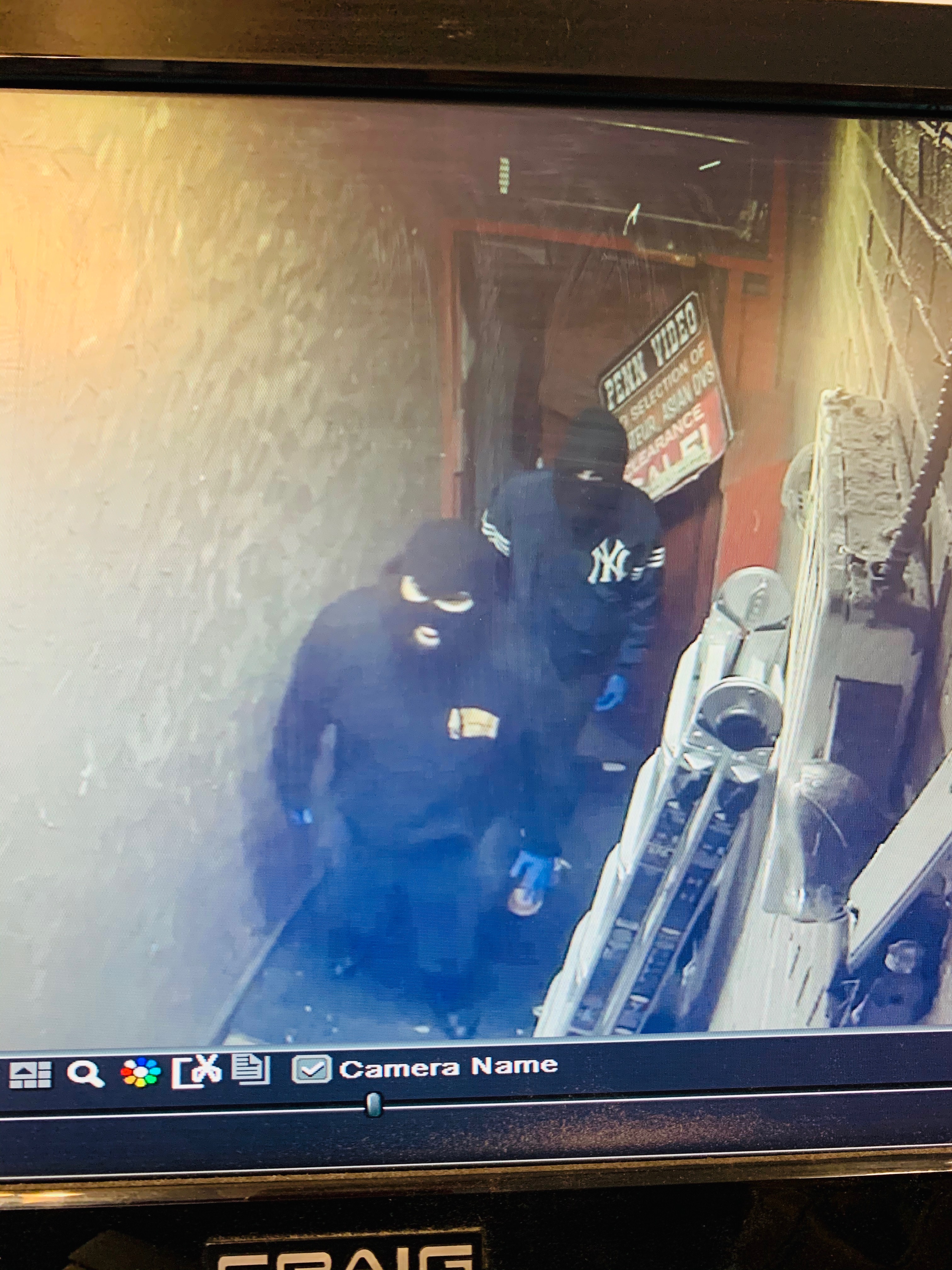 CCTV footage of 2 of the looters 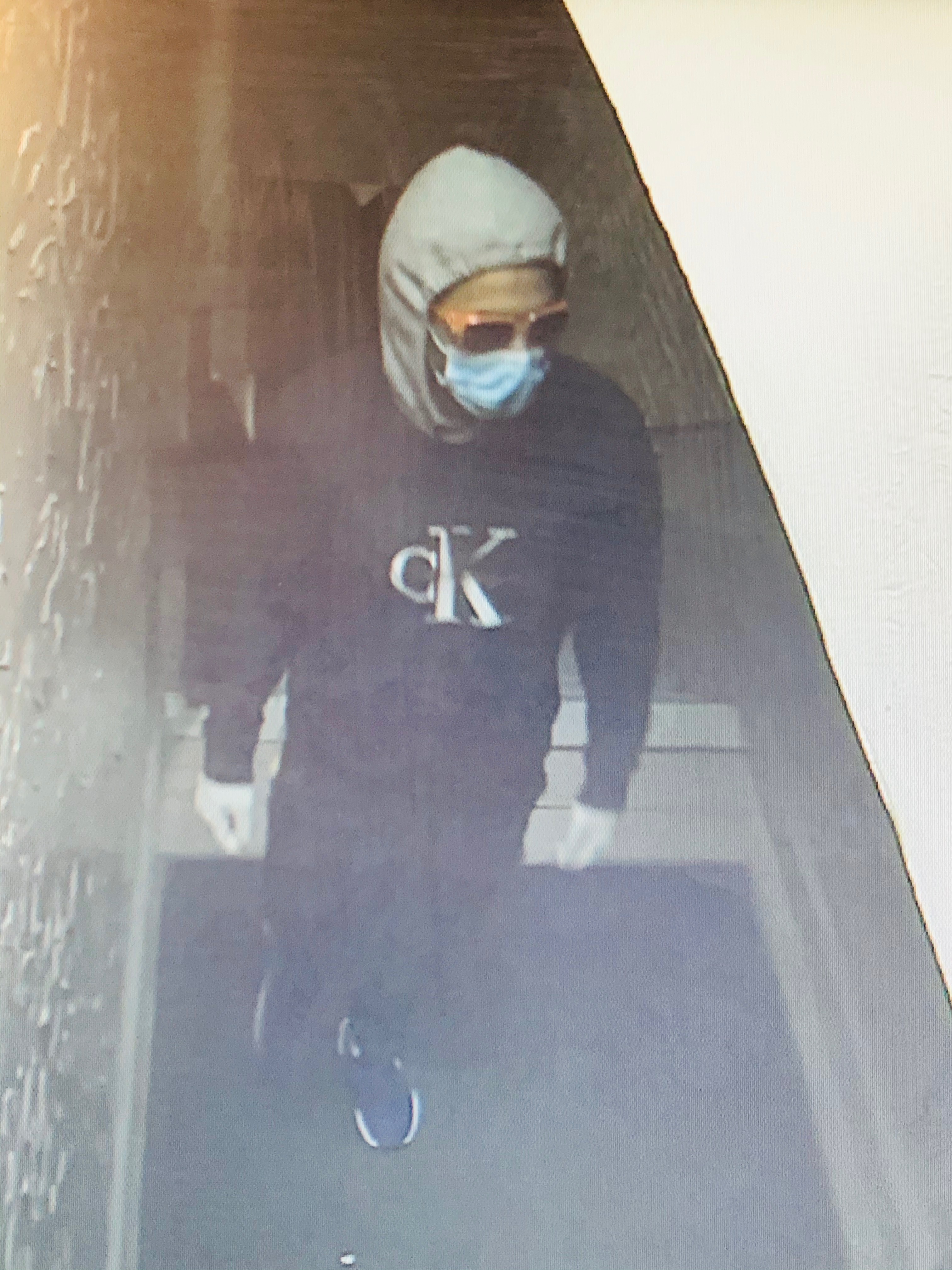 CCTV footage of 1 of the looters

They completely destroyed the locks on my merchandise and took everything they could. This happened not just to my store, but many others. The police told me there were 200 stores looted on June 1, 2020. SoHo was completely looted along with areas further up. This was clearly planned out, and this was done in broad daylight.

CCTV footage of 1 of the looters leaving

When I got there at 11 AM, and saw everything shattered, I was in complete shock. I immediately knew that I had to install deadbolts on every door to prevent further theft. From 11 AM to 3 in the morning, I could only watch over the packs of looters that followed.

Foot Locker, Macy's, and other nearby stores were all hit. These looters were people that ranged from teenagers to 30 year olds with modern new cars from all over the country. When I saw the looting in Verizon, I tried calling the police, and the line was just busy - the call just never went through.

The only time when it stopped for a bit was on Tuesday night (June 2, 2020) when we had an 8 PM curfew and the city blocked all the entrances to Manhattan. That day, when I came back at 11 AM, I don't know if it was the same peple, but from the hours earlier, another set of people tried to come in to loot my store, but luckily it didn't work because of the deadbolts I had put in.

No one expects anything like this, and I don't even know any of these people. Some people want to dumb it down and say that this never happened, but this doesn't make sense. These looters are only hitting luxury good stores, electronic goods stores, and clothing shops - those are the main targets. This looting is for greed.

I think that sharing this via social media will help. Anything shared with the pictures of the looters is perfect. If people would like to sell something to me, it can help them and I can try to make money back from selling. I have also set up a GoFundMe page, and am grateful for everyone donating.

My ultimate goal is to get back to restoration services, and operate on a customer to customer basis for the time being. I don't know where I'm going to end up - with a physicial store or not. My dream is to give back to the people the way people gave to me. I just want enough to pay for the things stolen. I want to get back my computer that was stolen with all the data on it, and I want to find these looters.

These looters manipulated the system to take whatever they could during a time when people are struggling. I just want everyone to understand that to live in New York, this is something that everyone is going through. It's not just me - we are all struggling together, and hopefully we can all find a way to get out of this and live happier.